Nowadays, mental diseases are common in people, especially in old age. About 22 % people are living with these diseases in today's world. Ayurveda has extensively described and given various natural remedies to manage or treat various mental health and neurological disorders.

Ayurveda and Alzeimers and Dementia Disease

In Ayurveda texts, Alzeimers Disease and dementia are referred as Smiriti-bhramsha (2). Sanskrit meaning of “Smitiri” is memory and “Bhramsha” is depleted. As per ayurvedic principles main reason for Smiriti-bhramsha is vata dosha imbalanced followed by brain’s dhatu (tissue, cells) weakening and depletion.

Balanced vata at celleular level not only make cells to use the nutrients to build tissues etc but also helps to remove the wastes.

So when vata at neuron levels gets vitiated, leads to accumulation of waste and toxins (ama) and may lead to the development of AD or Dementia.

Below vata disorder in chronic state become the precursors of disease like AD or Dementia.

So chronic vata imbalances, can lead to conditions like delirium or mental instability which when left untreated can lead to disorders like dementia and Alzheimer’s disease.

So to prevent dementia in the future, we should try to prevent its precursors.

As per Ayurveda there are some risk factors, which could lead to those precursors. More we live with these risk factors more is the chance we would develop the conditions like dementia. Some of those risk factors are listed below:

1. Misuse, more use or less use (than usual) of sense organs- eg. ear, which is one of sense organs- more use, is hearing constant load noises or music or working is sound pulleted industries. Excessive use of phone or talking calls is its misuse.

2. Constant incorrect shoulder and neck posture- this hinders the blood flow to the brain. So over the time could lead to conditions directly related to obstructed blood flow to brain. Constant cervical spines curve obstruct the passages of blood vessels, lymph, nerves etc. So the extra pressure on these parts and slightly affected blood supply to the brain can lead to poor functioning of brain or vascular dementia. Eg constant bending of neck curvature while using phone.

3. Incorrect way of breathing- proper breathing leads to proper oxygenation or feeding of body cells. Improper or half breath leads to malnutrition to weakness and eventfully to vata imbalance.

All these could leads to vata imbalance or nerve damages.

Symptoms of Alzheimer's disease and Dementia

Usual pattern for the onset of dementia is that, there is first gradual loss of memory and cognition followed by loss of coordination of senses and physiological functions like thoughts and actions.

Some of the most common symptoms of Alzheimer's disease and Dementia may include:

Vata is dry in nature. Following ayurveda principles, AD and dementia could be considered as dryness or depletion of nourshment of brain cells and tissues. In Ayurveda internal and external oleation  (with ayurvedic herbs and oils) of head region is mentioned to prevent or to address any vata disease of the nerve cells. Simultaneously dry diseases of gut like constipation etc (commonly found with AD and dementia) need to be addressed as well. Otherwise the proper absorption and supply of nutrients from gut to neurons may be compromised.

Concept of Ayurveda treatment for head regions disorder like- mental and brain disease, sinusitis, disorders of senses, hairfall or early greying are:

Hyper-hydration of the head with oils (treated with herbs) eg is head massages, shirobasti, shirodhara. Vata is dry, so these oleation (snehana) treatment are quite effective to pacify imbalanced vata.

As the oil used is treated with many herbs, it increases the antioxidant functions. Study in Sri-lanka (3) suggested that if herbal oil formulated correctly could be delivered into the brain cells by transcranial route. Being nervous system contains lipid tissue, and herbal oil used is also lipid in nature, so can absorbs because of rich vasculature of the scalp and gets distributed to different parts of the brain through the communication veins (extra cranial or intra cranial), exerting its influence on different brain areas, like limbic system and hypothalamus.

Nourishment of head with Ayurveda herbal oils eg is head massages, shirobasti, shirodhara may offer some support. Vata is dry, so these oleation (snehana) treatment aim to pacify imbalanced vata.

It’s an age-associated condition practically very difficult to cure, so better to work on prevention or minimising progression:

The following Ayurvedic herbs have been used traditionally to offer some relief in the symptoms for similar dieases like Alzheimer's disease and dementia along. Their effects may be enhanced along with conventional medicines. Below mentioned herbs are well known to prevent and stabilise conditions like Alzheimer's disease and dementia when taken in appropriate proportion.

The appropriate combination of herbs, in the veggie capsule according to one’s ayurvedic body type is also available from Pure Herbal Ayurved Clinic at Melbourne.

Licorice works as an antacid and soothes the stomach and intestinal walls. It is beneficial for people suffering with abdominal diseases, mental disorders and arthritic problems, as Ayurveda believes that root cause of most of the diseases is unhealthy gut. In Alzheimer's diseases, it pacifies the vata dosha. Thus, it may improve the symptoms of Alzheimer's disease and dementia as may help to prevent the  further brain cell death.

It is also known by the name of Indian ginseng and it is very useful in a variety of health conditions. It helps in osteoarthritis, gout, mental stress and infertility. It reduces mental fatigue and gives strength to the brain cells.

It contains natural bacopasides plant alkaloids, which are responsible for its beneficial effects on mental diseases. It also increases and restores the memory.

Turmeric contains a number of antioxidants, curcumin and curcuminoids. It helps to reduce the free radicals in the body and improves immunity and overall health. It also reduces inflammation and degeneration of brain cells.

It is immune-modulating herb and enhance the memory.

It enhances memory and concentration level. It is antioxidant in nature and has cholinergic activity.

Following classical preparation of Ayurvedic reciepies have been used traditionally by millions of Ayurvedic doctors all over the globe to treat neurological conditions like Alzheimer's disease and dementia. These Ayurvedic medicines must be prescribed by an Ayurveda expert and should not be purchased over the counter or online.

The following Ayurvedic therapies have been used traditionally in conditons like Alzheimer's and dementia and may play beneficial role in managing these diseases:

Shirodhara is an Ayurvedic therapy used in mental diseases. It involves gently pouring Ayurvedic oils or Ayurvedic decoction over the forehead. It helps with mental fatigue, stress and depression. It may also be recommended for patients with Alzheimer's disease and dementia because as helps to improves the memory and behaviour.

Nasya is an Ayurvedic therapy in which Ayurvedic nasal drops are administered through the nostrils. It tends to help in neurological disorders and diseases concerned with the upper part of the body. 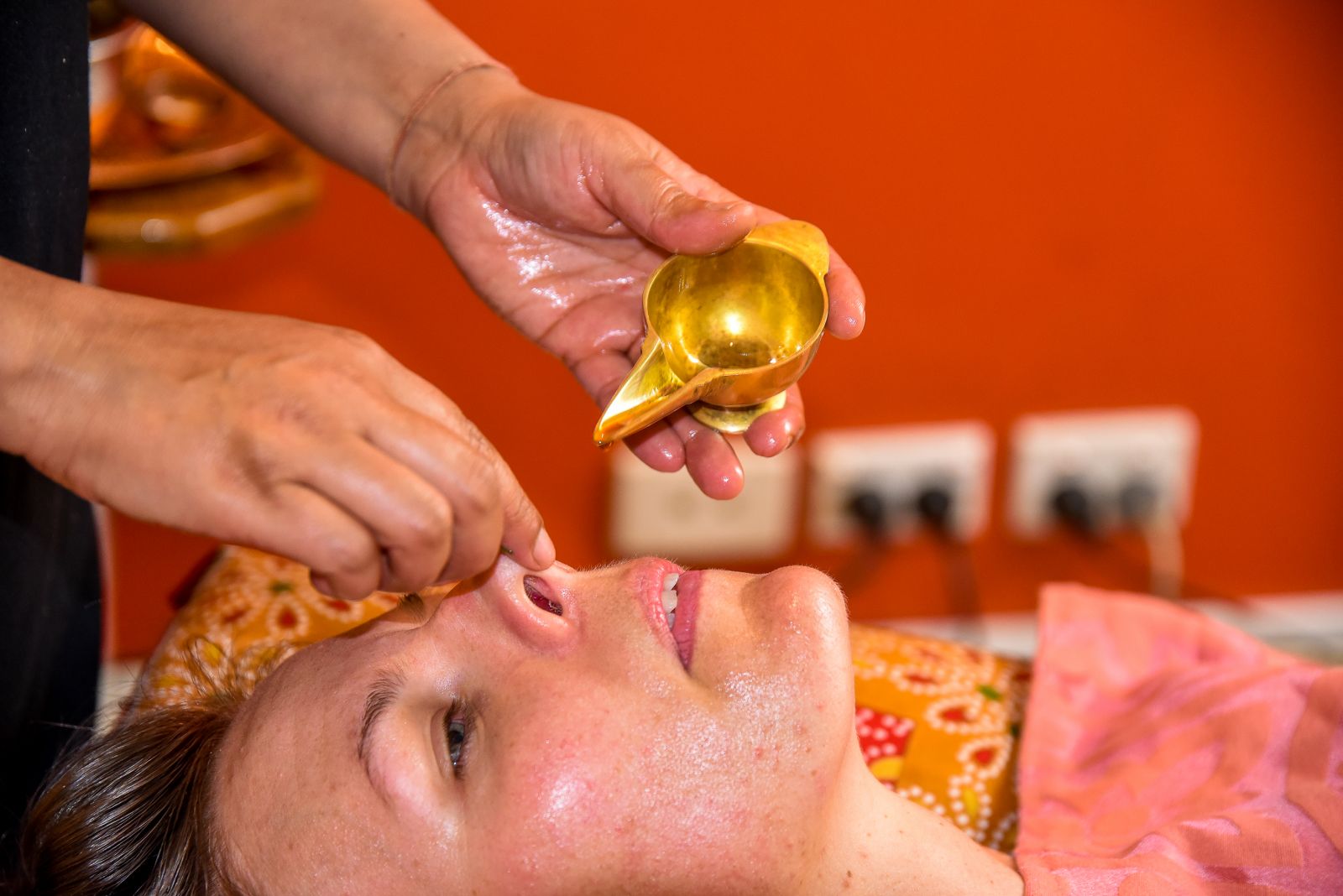 Yoga for Alzheimer's disease and Dementia

Regular practice of Yoga and meditation may (5):

There are six pillars considered of a healthy brain. These lifestyle changes may help prevent and reduce the progress of Alzheimer's disease and dementia:

Although, there is no guaranteed treatment for Alzheimer's disease or dementia, but Ayurveda aims to help firstly by preventing and then by controlling the progress of these disease.

The causes of Alzheimer's disease and Dementia are yet unknown but in Ayurveda, it is linked with three body humour's imbalance in the body. According to first complete medical system known to mankind “Ayurveda”, mainly Vata Dosha disturbance in the older age causes Alzhemer’s disease or Dementia.

If you wish to consult Ayurveda, you may choose to contact one of our Ayurveda Practitioners Gurnam Saini or Pooja Saini in Melbourne. Both of our Practitioners are Qualified Ayurveda Doctors from India. You may contact us at "Pure Herbal Ayurved Clinic".  People who can't reach us personally, may choose for online Ayurveda consultation.

Disclaimer: The information on any of the Ayurvedic Products, Ayurvedic treatment, Ayurvedic Medicines or other services on Pure Herbal Ayurved clinic website is for educational purposes only. Ayurvedic products should only be taken after Ayurvedic consultation with an Ayurvedic Practitioner. On the website, if any of the Ayurvedic Products mention heavy metals or some prohibited/restricted plants, the reader should understand that these products are not used, prescribed or sold by Pure Herbal Ayurved Clinic in Australia. Reader should not assume that all of the products mentioned on the website are available for prescription or dispensing in Australia.  Website has purely described the uses and indications of these herbal products based on Historical claims over time and Traditional Ayurvedic textbooks.  These are not for self-medication or online purchase. Please note that these claims may not be supported by TGA. The information provided on the website is not meant to be used to diagnose, treat, cure or prevent a disease. One should not take Ayurvedic medicine without Ayurvedic Consultation. Pure Herbal Ayurved Clinic does not accept any legal liability or responsibility for the accuracy, currency or completeness of the information provided.  Ayurvedic herbal products should be supplemented with appropriate diet and lifestyle to get beneficial effects. Ayurveda medicine may be generally considered safe if taken under strict supervision of a qualified Ayurveda Practitioner, but it may cause allergic or adverse reactions in occasional cases. We suggest that you discuss your Ayurvedic treatment plan with your Medical Practitioner to ensure safe and effective use and stop your Ayurvedic medicine immediately in the case of any adverse reaction and seek urgent medical advice.